Hi, guys. This is shitty, isn’t it? I know. To say that this has been an exhausting week is an understatement. But I can also say that the outpouring of love and support has been overwhelming. I keep saying it, but all your love is my strength, and I can’t thank all of you enough. (And if you don’t know what I’m referring to all I can say is go back and read the post I put up yesterday. It’s a doozy.) 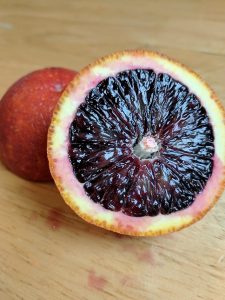 Needless to say, that afternoon–learning that I had a mass with the same approximate dimensions as a grapefruit attached to my ovary–threw my world into upheaval. There was a small silver lining to be found, however; when you have a softball-sized mass inside of you, doctors would like to get it out of you as quickly as possible, and for once the medical world works incredibly quickly and with maximum efficiency. I was getting blood work the next day, and a week later I was strapped down in a giant tube for an MRI.

Which, let me tell you, was no cake walk. For one, it’s so loud! In my sensory-deprived loopiness I started pretending that the repetitive banging was a house beat just before the drop, and I started making up dance moves in my head. And then there were the mind games I managed to play with myself. The MRI technician said I could keep my wedding rings on as long as I was certain they were real gold. Which of course they are, but that didn’t stop me from imagining that the tingles I was feeling in my left hand (from being propped up on my stomach for an hour) were actually the magnets getting ready to rip my finger off. Add to that the fact that I had to pee for the last 15 minutes of a test that requires you to remain perfectly still, and I left no fan of MRIs.

Two days later, I was back to my doctor for a follow-up of the MRI. This was the appointment that we were looking forward to (in a perverse sort of way) the most. It was here and now that we would finally learn just how serious this was all going to be. Was it going to be an out-patient procedure that would have me miss one, maybe two days of work? Or was this going to be major surgery that would have me at home for several weeks?

Here’s what we learned:

It’s a tumor. A probably benign tumor, since the blood work they did to search for a cancer indicator in the blood came back with very low levels, telling us that there’s likely no cancer. But a tumor nonetheless. It’s a solid mass that has likely engulfed my entire right ovary. (Seriously, between the ultrasound and the MRI, no one can actually prove that I even have a right ovary, since on one can find it.) But because the tumor has presumably taken it over, I will almost definitely lose my right ovary and fallopian tube. Which, I came to learn, isn’t that big of a deal, because apparently ovaries are like kidneys and you only really need one. (The more you know…)

This was…good-ish news. It was great to hear that this isn’t endometriosis, which apparently is a chronic problem that worsens with age. (And from what I’ve heard, pretty fucking painful. Mad respect to those of you worriers living with that shit, you are stronger women than I.) It was also great to hear that they’re 95% sure that it’s not malignant. But the not-so-great news was that the out-patient procedure was definitely off the table. The doctor told me that because she couldn’t say with 100% certainty that the tumor wasn’t cancerous, she was sending me to a gynecological oncologist for surgery. They would be able to tell once they got in there, she told me, whether the tumor was malignant and if so, how much more of my plumbing needed to go in order to keep the cancer for spreading. But they won’t know until they cut into me and start looking around, so no matter what, I’m looking at some pretty invasive surgery.  The oncologist would call me back probably within the next five or six days, she said, and I would probably have surgery scheduled within the next three or four weeks. Even if the tumor isn’t malignant, with its massive size it still has the potential to do some serious damage in there, and they want it out as fast as possible.

Not even 10 days ago, I thought I was in near-perfect health. If you’d told me that I’d be facing surgery within the next month, I’d assume that I was going to be hit by a bus in the near future. Which, in an emotional sense, might be easier than what I’m facing now. There’s very clear and simple causes leading up to getting hit by a bus; primarily, getting hit by a bus. Future prevention is pretty easy, too: don’t walk in the street in front of a bus. But this. I don’t know what caused this tumor to grow inside of me, but it’s likely nothing that I did or could have stopped. And even once they remove it, even if there’s no cancer, what’s to stop it from coming back? I don’t fucking know, because I don’t know what caused it in the first place, other than that some of my dead cells started piling up for who-the-fuck-knows-what-reason until they formed a softball-sized pile of fuck-you-Stephanie. And it’s that unknown that is the hardest to face.

I’d be lying if I said I wasn’t scared. But I have an amazing, beyond-supportive husband who’s in my corner 100%. Very soon he’ll have to help me get around while I recover from surgery, but even before then, he’s allowing me to heal from the emotional trauma with love and support. Things like finishing the laundry for me because before I could, I got overwhelmed by terror and depression; he saw that I was paralyzed with fear so he guided me to bed and turned on The Last Unicorn for me until I fell asleep.

I’ve also been overwhelmed by the support and love that has come from family and friends. Limitless offers of emotional support, as well as the literal in the form of meals and post-surgery care. Unanimous effort at work to help cover me while I’m gone, and pledges to support me coming back to the work during the tail-end of my recovery. A friend told me in earnest and thorough detail about her own mother’s abdominal surgery, with the encouragement that based on her mom’s recovery, I might be surprised how quickly I’m back up and around. Friends brought me cake (and a grapefruit) to go with the hugs and whispered words of confidence. It’s amazing and wonderful how much love has been shown to us in the last week, and it’s been made very clear to us that Kyle and I won’t go through this alone.

So that’s where I am. Likely a few weeks away from surgery, obsessively trying to make plans to deal with the next month while our world is turned upside down. Equally obsessively (and less successfully) trying to keep the fear and uncertainty at bay. But also full up of love and support.

When I told my coworkers, I was particularly nervous. I was worried because I didn’t want this to change our relationship until then, and even after I’m healed. I wanted them to treat me like my same strong, confident, rag-able self who isn’t afraid of hard work, not like some delicate thing that might break. As I told them the news, I watched their faces contort with shock and concern, and there were understandably questions. As the room grew quiet, and I became more and more certain that our working relationship was changed forever, one of my coworkers leaned forward in his chair. “So, what you’re saying is…” and in Peter Griffin’s voice parodying “Rock Me Amadeus” sang, “I’m a tumor, I’m a tumor I’m a tumor, Oh, Oh, Oh I’m a tumor.”

It felt good to laugh that hard.

We’ll be okay, my grapefruit-tumor and me.

Next post: When It’s Okay to Call Me ‘Baby’