A Taste of Chaos or Our Trip to NYC 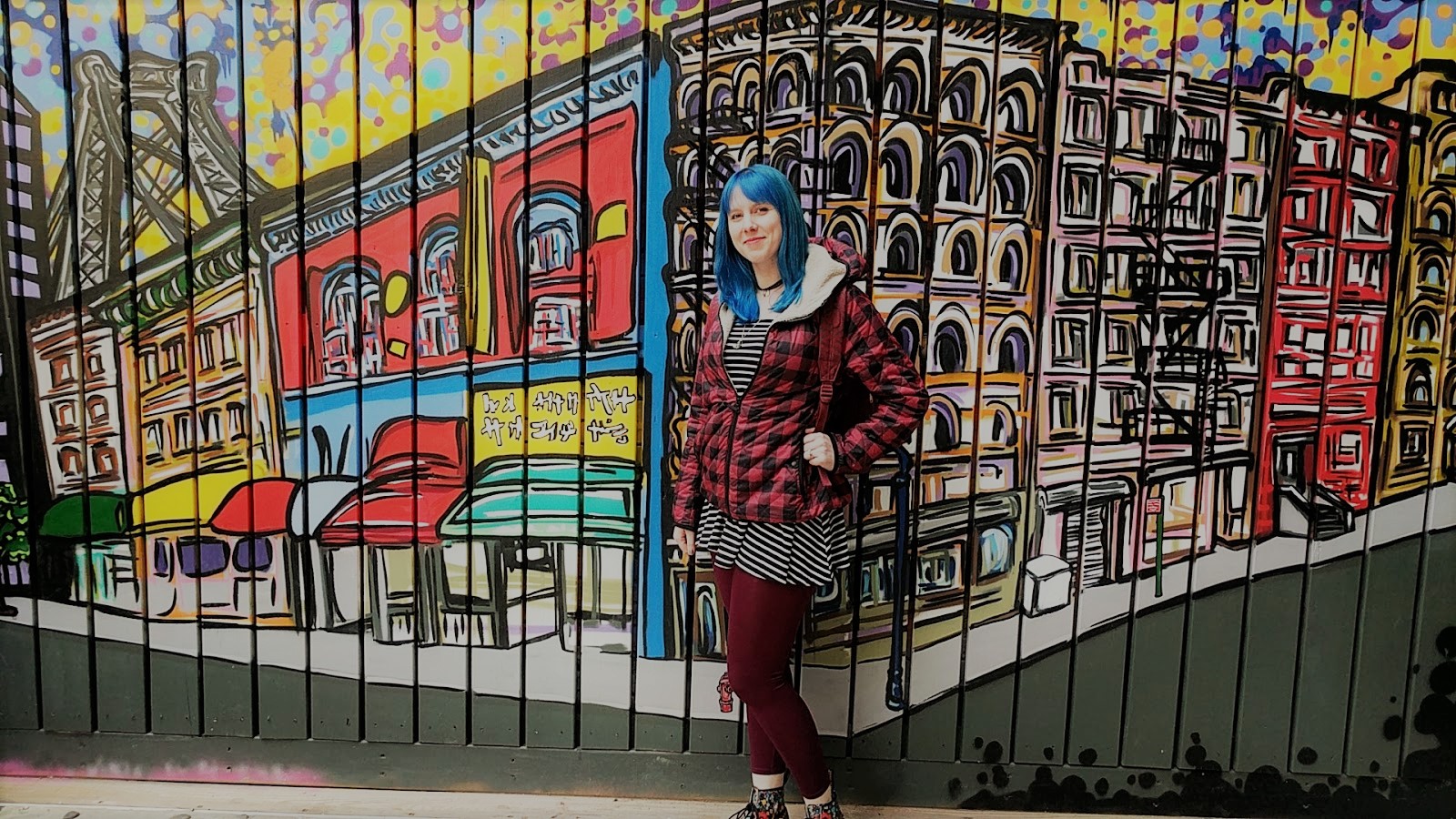 It was a short trip. Down for one day, back up the next night. But it was enough to get a taste of that wild, chaotic, smelly, beautiful city before disappearing back up to our haven of peace and calm upstate that we call home.

(Author’s note: You’ll notice by our wardrobes of long sleeves and winter coats that this adventure did not happen recently. It was actually sometime in March, I think. I worked on this post for about a month, (picture-heavy posts take longer because I am bonkers slow at photo-editing and formatting,) and was planning to post it around the end of April when…well, when tumor happened. And suddenly there were much more important things for me to share with you, dear reader, than our little trip to the city. So I beg you forgive me the delay in posting, and also that you remember this little speech when I inevitably post other blogs acting as if events of a few months ago happened just now. Just…pretend the last two months didn’t happen.)

It started with a train ride… 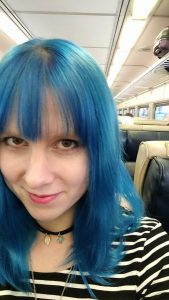 …followed by an obligatory selfie with the ceiling at Grand Central Station. (Seriously, you have to. They won’t let you leave the station until you’ve taken a picture with the ceiling. They really prefer that you throw in a peace sigh, but they let me get away without.)

We stayed at the Orchard Street Hotel, which was that perfect Lower East Side combination of super artsy-modern, and bonkers tiny. Luckily, we didn’t intend to spend that much time in our room, so the lack of square footage didn’t bother us any. 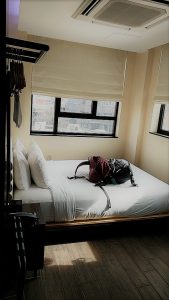 (Which, if you’re wondering what constitutes a “New York” view, the answer is the skyline romantically glowing in the distance with someone’s dirty rooftop in the foreground. Extra points if there’s random garbage–like plastic coat hangers or a broken lawn chair–on aforementioned rooftop.) 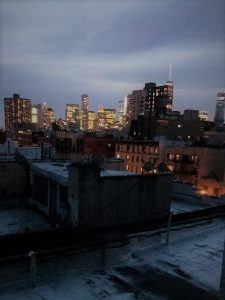 We spent the rest of the day just bopping around the Lower West Side, exploring some of the more interesting shops in SoHo and Greenwich Village. 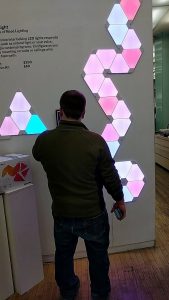 And, of course, we had to go to Uniqlo, because I am physically incapable of being within twenty square miles of a Uniqlo without spending at least $50. (Seriously though, a jacket, three undershirts, three pairs of socks, and two sweaters for $60? That’s insane.)

We went back to our hotel for a quick nap, (because walking all over the Lower West Side is exhausting, yo,) before going back out for the night. 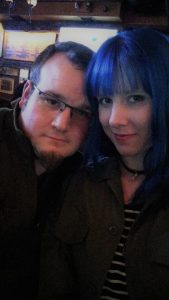 We had planned to go catch a show at a nearby venue, but then we found the bar across the street from our hotel. It had $3.50 beers during happy hour, and was just more…us. 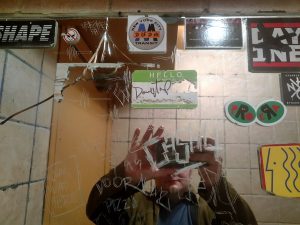 After a couple rounds, we headed to St Mark’s Place to spend a little time in what is easily one of our favorite places on the island: Barcade.

Say the name out loud, at it’s exactly what it sounds like; it’s a bar that features a shitload of old school arcade video games. Their beer prices were definitely higher then the dive bar we’d been at previously, but I assure you, that dive bar did not have a Gradius console.

We’d found Barcade on a previous trip and immediately realized that we’d stumbled upon a gem. The beer selection is vast, the staff polite, and the arcade games nostalgic. Oh, and did I mention that most games still only cost a quarter? (A fact that we did not know the first time we went until after we’d already fed $20 into the change machine. We fucking made it rain.) It’s perfect because you can not only go there to drink, but to hangout and play games and discover that you don’t totally suck at Ms Pac-Man while you drink. 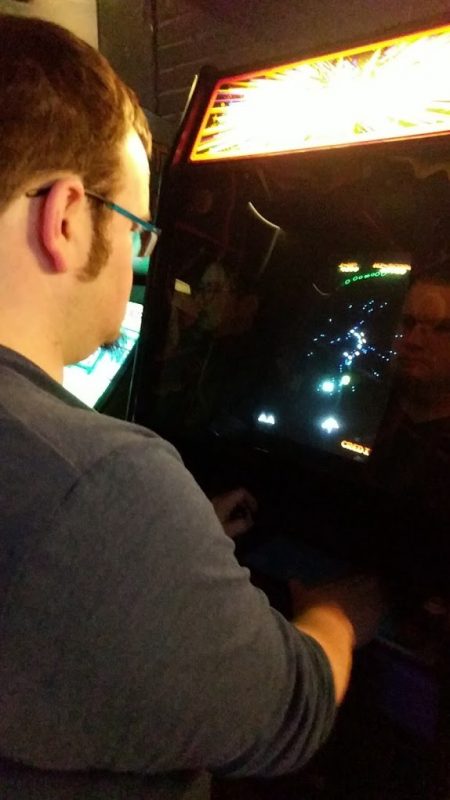 Of course, there’s another reason why we adore Barcade so much. It just so happens to be right across the street from our favorite restaurant in the entirety of the New York City metropolitan area: Yakitori Taisho. Or maybe it’s Oh! Taisho. I don’t actually know which one we ate at, as they’re right next door to each other, have identical menus, and we’re pretty sure they’re owned by the same people. We usually go into whichever one looks like it has less of a wait. But either one we go into, the food is fucking. delicious. Seriously, Kyle has made excuses to accompany me on business-related trips down to the city just so that he can get yakitori from one of these places. To even suggest that we not go for yakitori while we’re down is an inexcusable offense.

There’s just something about a giant plate covered in grilled meat on a stick that makes me wiggle with happiness. Kyle’s favorite skewer was the pork belly. I’m personally partial to the gizzards, but we both agree that (as long as you get to them before they re-congeal) the crispy chicken skin is the absolute shit.

Breakfast the next morning was to-go from a Greek deli who’s name I’ve already forgotten, but it was right around the corner from our hotel and had a smoked salmon that was super tasty. On a garlic bagel and teeming with capers…nothing better.

(If Kyle looks at all bewildered, it’s because despite the fact that I told him that I was specifically searching for a place that would have good smoked salmon, his sleep-addled brain didn’t retain that information. So he was very, very confused as to why my choice for breakfast featured a display case filled with sides of smoked fish and endless choices of caviar.)

Every time we go down to the city, our goal is to explore a new neighborhood. This trip’s target of discovery? 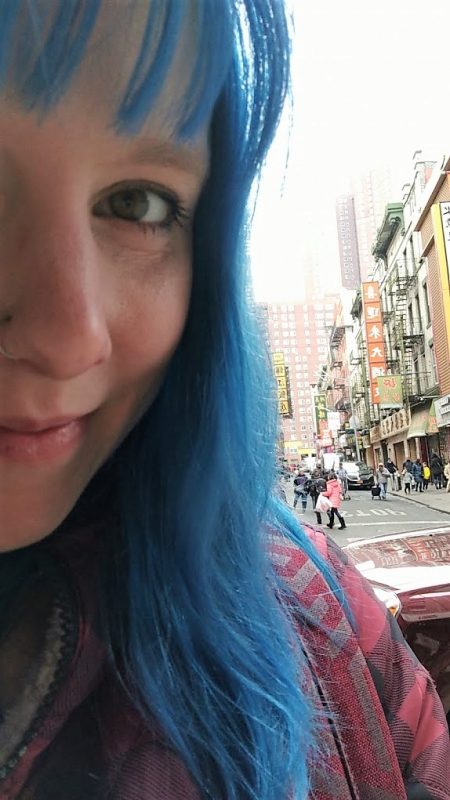 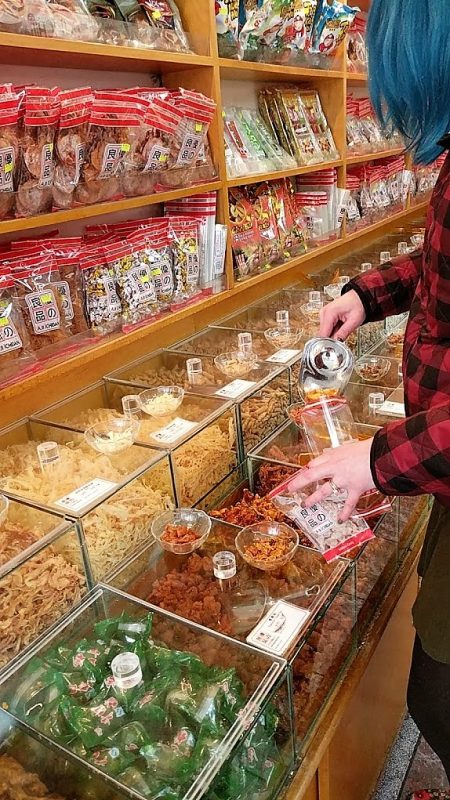 Our first stop was a tiny little place I’d read about called Aji Ichiban. It’s a small shop, no more than a few hundred square feet, and it’s teeming with Asian and Western sweets and snacks. Like most sweet shops, it has a huge selection of bulk items, but unlike most sweet shops (that I’ve been to, anyway,) they strongly encourage sampling.

Which was a very foreign concept for my Western brain. Seriously, what other snack/candy shop is okay with you tasting their bulk items before you buy them? Usually that’s how you get kicked out of a Healthy Living and told not to return. (Or something. That I would know nothing about.) I was so suspicious that this behavior was really okay that it took me a solid ten minutes of perusing before I worked up the courage to take a sample from one of the tiny bowls sitting on the top of each bin, but low and behold, no one blinked when I reached out for a tiny fragment of candied ginger.

Once we realized that tasting was kosher, Kyle and I wandered the tiny shop, tasting and trying flavors both foreign and familiar. We ended up leaving that magical little corner of snack heaven with some pocky, plum candied ginger, spicy dried squid bits, tiny rice-encrusted dried crabs, and (of course) penguin gummies. (Because I adore gummies and I adore penguins. So of course.)

We also made sure that our trip to Chinatown included a trip to a tea shop for some bubble tea. Unfortunately for us, we quickly realized that the bubble tea we’d been drinking at home (while delicious) was a cup full of liquefied crap compared to the sweet lusciousness that was that particular Chinatown bubble tea. And just like that, another scrap of my heart was left in Chinatown. 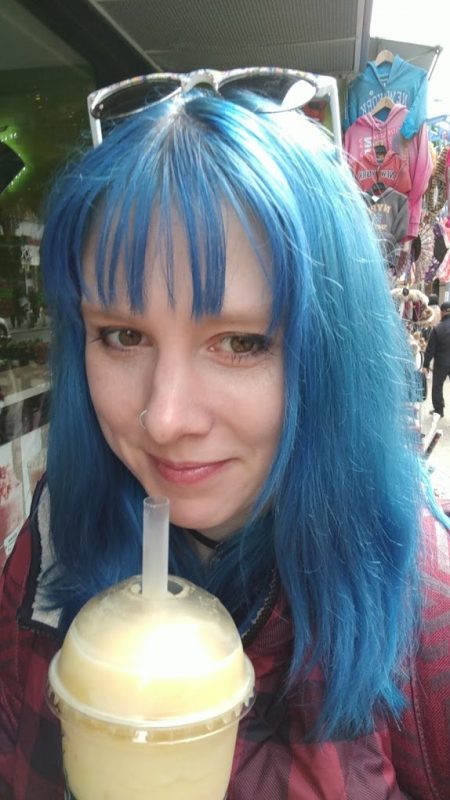 By lunch, we’d explored Chinatown to our satisfaction, and punctuated it with lunch of bánh mì sandwiches. After that, we found ourselves just…wandering the island of Manhattan. Without a plan, we walked to wherever our whims took us. We ended up in some surprising places, not knowing where we heading until we realized that we were there.

…the Oculus (the transportation hub of the World Trade Center)… 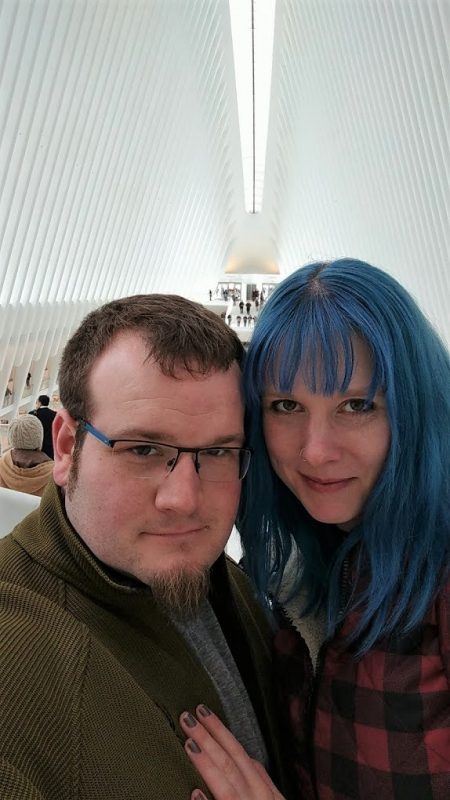 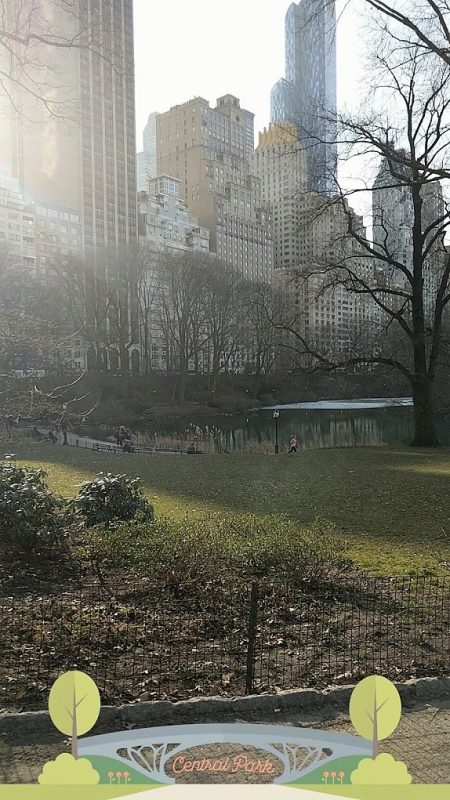 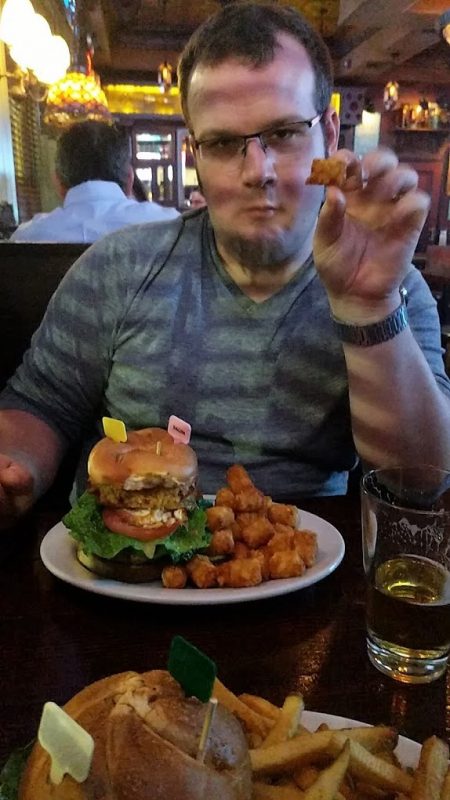 Eventually, we made it back to our hotel with a few hours before our late train home. We probably should have taken that last opportunity to seek out some new and exotic cuisine unavailable to us in Saratoga Springs, but after an entire day of traversing the city on foot, we were completely and absolutely exhausted. Instead, we took refuge in the geographically close and emotionally comfortable walls of the bar across the street from our hotel. It didn’t exactly take us outside of our culinary comfort-zones, but the food was good, the beer was cheap, and we didn’t have to go on an epic journey to discover and then travel to it. And that’s exactly what we needed in that moment.

A few hours later, we were back on the train home, physically drained but emotionally satiated.

Kyle and I have never had a strong desire to live in the city. Even the simplest of tasks, like grocery shopping or going to the gym, just seem harder there. Besides, our connection to the mountains is just too strong; we need to at least be able to see the whisper of the mountains where we live and know that we could be there without too much effort.

But every once in a while, we love to dip ourselves into that fracas of humanity and life and feel the energy swirl around us. Even if we wouldn’t trade our oasis of nature and tranquility upstate for all the NYC excitement in the world, it’s nice just to get a taste of chaos. 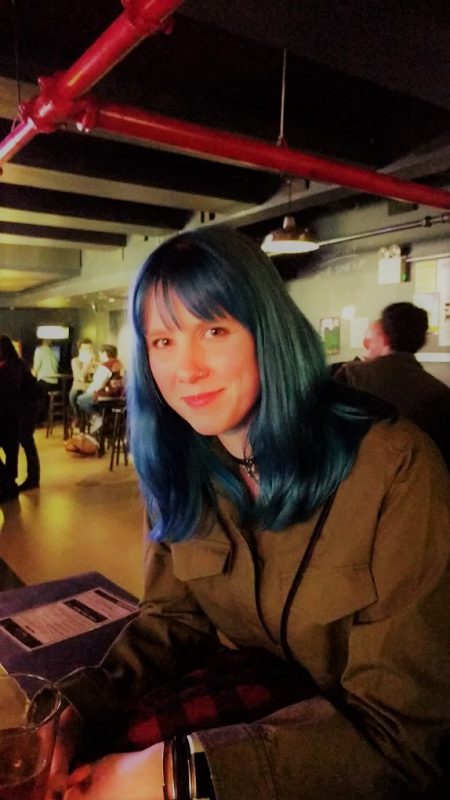 Next post: Off to the Races or Why Summers in Saratoga Springs Are My Favorite

Previous post: No More Shame, No More Pain or Let’s Talk About Our Thighs