My Descent Into Uncool or How I Dorked Up Snap Spectacles

For my birthday, Kyle bought me a pair of Snap Spectacles. 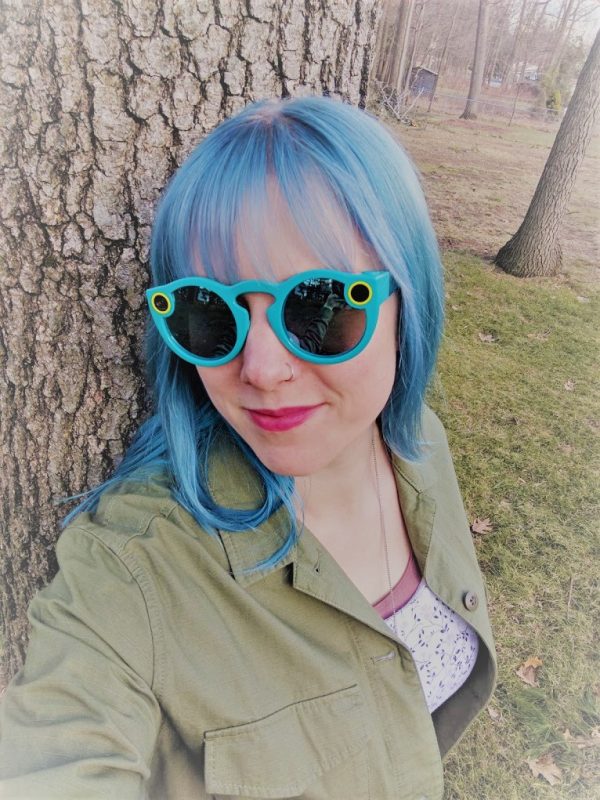 You know, the sunglasses with the built in camera that let you take video from your face and post it straight to Snapchat? They’re like Google Glass, except much less expensive and wearing them doesn’t make you an epic douche?

(They admittedly probably make you a mild douche, but not an epic one.)

First chance I got, I convinced Kyle to go for a walk downtown with me so that I could try them out. As we walked through the park and went for bubble tea, I took little video snippets of ordinary things, just enthralled with the ability to effortlessly and unobtrusively record my experience. I loved the way that I could start a video and then not think about it again as it recorded and automatically stopped when time was up, allowing me to fully experience the moment instead of actively shooting and posting on the spot. The videos were probably of the mundane variety, mostly just me talking about bubble tea and looking at the storm clouds in the sky (and once tripping over the sidewalk,) but it showed me the possibilities for the technology. Something tells me that they’re going to be very fun at the track this summer!

But, if I’m being very honest with myself, there was a little extra excitement that didn’t have anything to do with the tech. It came from the fact that I felt very, very hip, and very, very cool. See, I’ve never seen a pair of Spectacles in the wild; the only person that I even know of who owns a pair is a technology blogger that I follow. Up until very recently, they were hard to even get, since they were only available for purchase at these weird little yellow R2-D2 vending machines that moved locations daily, and without announcement. And the fact that they (mostly) resemble plain old sunglasses only added to my perception of my own hipness; it felt like I was so trendy that no one we passes even realized how much cooler I was than they were.

But as I was strutting down the sidewalk, chewing on tapiocas and complaining that it wasn’t nearly as good as the bubble tea we had in Chinatown, a though popped into my head. It flickered like a neon sign in the dark, there for only a moment and gone, a ghost of it floating just behind my thoughts as we walked.

“Am I actually hip and cool, or just one of those sad adults who thinks they’re hip and cool?”

You know who I’m talking about. You see them walking down the street, wearing what they think “the young people” are wearing. They declare things, “on point fleek” without actually realizing what they’re saying. They make things like glitter eye shadow and embellished jeans that ride way too low part of their signature look, and they pick up their kids from school in “hilarious” raunchy graphic tshirts and cargo shorts.  And even though you say out loud that you admire their confidence and encourage them to let their freak flag fly, secretly you’re embarrassed for them. No one wants to be that person, and (at least I think) it’s fear of becoming that person that drives us to become more fashionably conservative as we age. When we get to “That Age.” After all, if you don’t try, you can’t fail.

And I wondered, is my rocking a pair of Spectacles actually hip and cool, or do I just feel hip and cool because I think that this is what hip, young people are into? I posed that exact question to Kyle, who unhelpfully answered, “Yes.” I don’t know if that was his way of saying, “A little bit of both,” or if the consequences of a wrong answer terrified him and he panicked, but since I love him I didn’t make him elaborate. I think my answer is a similarly, “Maybe…” It’s quite possible that I am not even remotely hip and cool, I just feel that way because the perceived cutting-edge exclusivity of this product makes me imagine that everyone else admires them as much as I first admired the blogger who got her hands on a pair. It’s also quite probable that most people aren’t paying a lick of attention to things outside of their own corner of the world, so they don’t notice me at all, let alone my sunglasses. And those that do would probably respond with an anemic, “Neat,” because Spectacles are a straight-up grown up toy, and one that most people probably don’t have a strong desire for.

But even if my Spectacles don’t make me cool (or even make me decidedly uncool,) the answer to the cool-uncool question that I’ve landed on is–

Let’s face facts, my very fashion style–with all its hits and misses–already broadcasts to the world that I don’t really give a shit about what’s cool or not. From my collection Dr Marten boots (which a relative initially dubbed my first pair “zombie drag queen boots,”) to my love of army jackets paired with floral sundresses, to my technicolor hair, I’ve always been more interested in pleasing myself than the fashion world. I do things and wear things that make me happy, and my Spectacles definitely make me happy. So I will wear maroon jeggings with flannel shirts, I will paint my nails glittery purple, and I will walk around talking to myself while my sunglasses take a video of ducks, because those things make me happy.

Even if that makes me uncool. 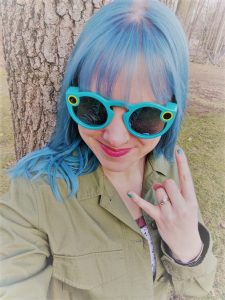