Oh, I didn’t tell you? Clearly you must not be in the tri-state area, or you probably would have heard me shout it one of the first three hundred times.

The process of buying the house was fucking painful. Not because there were all kinds of snags and negotiations and hurdles or anything; actually in the grand scheme of things, the process went very smoothly, and happened about as fast as real estate is capable of moving.

It started in early November. We’d started the house hunt before at various points over the last couple years, but always put it on hold due to money. We were living fairly comfortably and had a decent amount saved, but it wasn’t really enough to be able to afford to stay in Saratoga Springs. We’d talked about moving to different areas, up north in the mountains or down closer to work, but we just couldn’t get excited enough about any one place to make it worth moving away from the city that we love. So we always put it off.

But a few months ago, two things fell into place that let us re-start the hunt. One, we had amassed a much bigger pile of savings thanks to some seriously thrifty living. And two, our financial situation got a big chunk more comfortable. (Read: Kyle got a pretty hefty raise.) So we started looking again. By this point, we’d done enough looking around to know where in Saratoga Springs we wanted to look down to the neighborhood, so when we called our real estate agent for the first time, we already had a list of three houses that we wanted to see. We set up a time to meet her and go see a couple houses.

The thing about the houses we saw that day is that it was not the first time we’d walked through them. Well, not those houses exactly, but the thing about the Geyser Crest  neighborhood is that there’s only about three floor plans to be had, and we’d walked through several of each kind during previous searches. So when we went looking that day, we already knew what we were walking into and what to look for. It made it very easy to zero in on the details without being distracted by layout, and we were able to tell pretty quickly when a house was in rough shape. Two of the houses that day were duds, and it wasn’t hard to cross them off the list.

But then we stepping into the little green house, and we almost instantly fell in love. The funny thing about it is that on paper, (or Zillow, but who’s counting,) it was the least impressive of the three; we weren’t really interested in it, but were going more for shits and grins.  All that changed when we walked through the door into the sun-filled living room that gleamed off of the warm, bright hardwood floors. A walk through the dining room revealed a kitchen that, while not our personal ascetic, was certainly functional, and featured a gas range. The rest of the main floor was rounded out by three(!) bedrooms, all framed by the same lovely hardwood floors and brand new windows. But it was really the finished basement that sold me.

The basement was teal. Almost the exact shade of my hair. 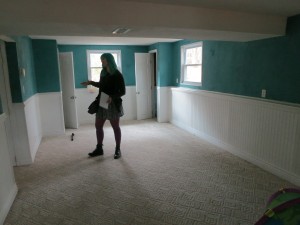 Right then, I knew that this was my house. Everything about it felt right. Is it perfect? Absolutely not. The kitchen has linoleum floors and laminate counter tops. The lot is pie shaped, so there are more than two neighbors to contend with. And the room that would eventually become our office was bright fucking orange with a picture of a giraffe on one wall. But the bones are fucking solid, and all the components that tend to be expensive (windows, roof, furnace,) are almost brand new. So what if a few rooms weren’t our particular chosen color? Besides, it felt like home. It felt like our home.

We put an offer in the very next morning.

And that’s where the single tiny bump in the process appeared. We’d no sooner finished signing the last dotted line on our offer, ($5,000 under asking, because who actually comes in at asking?) when our agent got a call from the selling agent. Apparently the sellers had just received another offer. So we took off our coats, sat back down, and started the whole process over again. This time we offered $500 over asking, (just as a little extra incentive,) which still felt like a very fair price. And then we waited 12 torturous hours for the sellers’ response.

That evening, our agent called us back. The other offer had come in higher than ours by $6,500, but with some pretty hefty seller concessions. The selling agent told ours that if we were willing to come up $1,500 with no concessions, it was ours.

Of course, we said yes.

Now, that’s the point on all the HGTV shows when the real estate agent says, “Congratulations, you’ve just bought a house,” and the upbeat guitar music plays to indicate that their long journey is over. And as anyone ever who’s ever bought a house can tell you, that’s a steaming crock of shit. No, the hard part is just beginning.

Then comes the waiting.

Previous post: There Are Scraps of My Heart All Over the World