I have no memory of most of what was told to me after my surgery. Kyle says that someone (a nurse? my surgeon?) told me how it had gone and what they had done, but I don’t remember this. Apparently I smiled and said, “Good,” a lot until a nurse handed me a graham cracker, but I don’t remember that either. I do, however, vividly remember the nurse lifting up my gown to check on my incisions.

Yeah, you read that right. Incisions. As in, more than one. That was a surprise, which is probably why I remember it. I’d been under the impression that the only two options on the table were a single 6″ incision (meaning that they’d found cancer and given me a complete hysterectomy) or a single 1″ incision (meaning no cancer, and they’d removed the mass as planned by cutting a small hole in the back of my vagina and pulling it out through the vagina.) Not five 1″ incisions dotting across my belly.

As my friend Christine put it, “You look like you’ve been perforated for easy tearing.” So yeah, that was something I wasn’t exactly emotionally prepared for. I’d also guessed that my incision was going to be lower, more in the pelvic region; someplace less…obtrusive, if you will. To this day, I still haven’t emotionally dealt with the fact that I’ll forever have a line of scars across my stomach. I’m crossing my fingers that they as they heal—with the help of some scar diminishing balm—they’ll fade to the point where they more or less disappear. (And if not, I already have a story about fighting a shark ready to go.)

at first. Sure, lying in that bed, I felt like I’d been flattened, and I was fairly confident that my throat had previously been on fire. There was also some definite throbbing in my midsection, thanks to the aforementioned incisions; it felt like I had done the P90X Ab Ripper workout 500 times without stopping. But I didn’t feel sick, and I certainly didn’t feel the stabbing pain that I had imagined would accompany a person’s skin being sliced open. Lying in the hospital bed, I just felt…fuzzy.

All that changed when I tried to sit up to dress myself.

Maybe it was the drugs, maybe it was because I’ve never had surgery before. Either way, I legitimately thought I’d be able to hop up and put my clothes on like normal. The moment I tried to raise my shoulders away from the pillow, my stomach muscles tried to engage and I screamed. With Kyle’s help, I was able to slowly make my way up to a sitting position, and it was only then that I realized just how bad of shape I was in. It wasn’t just the cuts on my stomach. I could suddenly feel every single muscle in my abs, all the way into my pelvis, and they all felt like they’d been shredded into brisket. I couldn’t believe how weak I was. It was also about this time that the nausea set in.

I don’t remember much more from the rest of that day. I remember having to sit with the orderly while Kyle brought the car around, and her telling me that Kyle was a good husband so I should reward him by giving him five babies. (HA!) I remember getting home and being so happy that I wanted to cry because I was in my own pajamas in my own bed and not in the hospital. I remember telling Kyle that I didn’t want the crackers he tried to get me to eat because crackers are too messy to eat in bed and I wanted beef jerky instead. And I remember a mug of egg drop soup that was the most delicious motherfucking thing I’ve ever eaten. 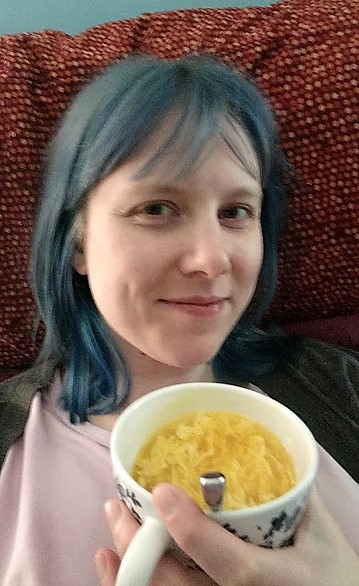 Things were really rough at first. Even with a steady stream of oxycodone in my blood, I was in a lot of pain. I could barely walk to and from the bathroom, and even with the help that I required, getting in and out of bed usually caused me to cry out in pain. Every time I wanted to get up to pee, get something to eat, adjust my pillows, or even grab the remote if it was out of reach, I had to ask Kyle or Karen for help. And I was so, so tired. I slept a lot those first couple of days.

Despite my rough shape, progress came surprisingly quickly. Two days after surgery, I’d figure out how to get out of bed by myself; the secret was using the turtle strategy to rock myself onto my side and push up with my arms. A few days after that I managed to shower and dress myself without assistance. (Let me tell you, I didn’t know elation until the first time I was able to put on a pair of underpants by myself.) And a week after surgery, I was back at work. Granted, I spent most of the day pushing myself around in a rolly office chair, and definitely not doing anything that even resembled physical labor. But for a week out of surgery, it just felt good to see how far along I’d come.

My recovery was moving forward at full tilt, but the healing? Only just begun.