Another Encounter With Wild Animals, and This Time No One Dies

Okay, so I’m at work on Sunday, right?  And during our dinner break, our audio engineer, one of the stagehands, and I decide to go to Taco Bell for some sunshine and some awesome cheap crap food.  So we come back to the Egg, and we park in the parking garage, and get out of the car.  Josh (the audio guy) and I are standing there, waiting for the stagehand to catch up, and we see a squirrel dashing around the garage.  We watch it for a moment, and suddenly it turns heel and starts running towards us.  I’m a little nervous, becuase the look on its face says that it’s going to leap at us and gnaw our faces off.

But it doesn’t attack us.  That fucking squirrel ran right up to us and–get this–pops a squat right on Josh’s shoe. 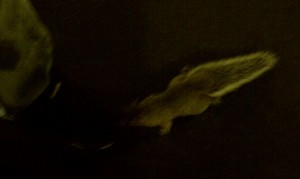 So we call our buddy over and we’re all, “Dude, check out the fucking squirrel!”  And we’re standing there, watching this squirrel, who’s sitting there at our feet, chilling.  Our stagehand buddy had a couple chicken flat bread sandwiches left from Taco Bell, so he tears off a piece of bread and chucks it at the squirrel.  The squirrel grabs it and starts chowing down on the Taco Bell.

At this point, we’ve all taken out our phones to take pictures of this squirrel.  And the wild part is that it seemed like no matter how close we got to the squirrel, he doesn’t seem to notice. 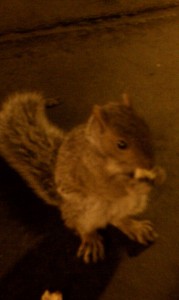 Like, we got up. in. this. squirrel’s. shit.  And he doesn’t. seem to care.  We literally have picture’s of this squirrel’s corneas, and he never blinked.  He just sitting there, going to town on his Taco Bell.

Seeing as nothing, not even the flashes on our cameras, is phasing this animal, Josh starts reaching out and touching the squirrel. 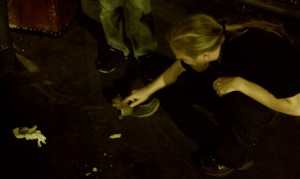 At first the squirrel  jumped a little, but not in a, “Holy shit, I will attack your face!” sort of way, but in more of a, “Dude, cut it out,” sort of way.  He just turns around and keeps chowing down on his Taco Bell.

Next thing we know, Josh is squatting on the floor of the garage, petting this squirrel.  It was insane.  So our buddy and I are like, “Dude, try and pick it up!  Try and pick it up!”  So after a short discussion on how to best pick up a squirrel, (like a hamster, it was decided,) and what he’d do if it bit him, (punt it,) Josh gently grasps the squirrel under the armpits and lifts him up.

The first time he tried it, the squirrel kicked a little, but didn’t go apeshit.  So Josh puts the squirrel back down, pet him for a little, and tried it again. 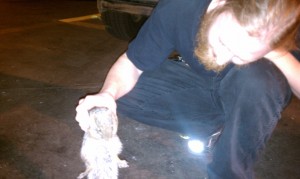 And that fucking squirrel just kinda…let his feet flop and kept munching on his Taco Bell.

By this point, we’ve been joined by our boss and an usher who are also looking on with interest.  Then begins the discussion of what to do with Lil’ Squirrely.  (I named him.  Everyone else thinks his name is Stave, but this is my fucking blog so we’re going with my fucking name.)  The stagehand and I want to take him upstairs and make him the official Egg pet.  Think about it, we could have renamed him Eggy and he could have hung out on top of Josh’s console during shows and rocked it out.  Hardcore.

Our boss, however, says something along the lines of “Abso-fucking-lutely no.”  He does, however, suggest that we take him upstairs and outside to the Plaza, which features some grassy areas and trees.  We thought he’d stand a little more of a chance upstairs, where he wouldn’t have to be constantly dodging cars.  Because let’s face it, Lil’ Squirrely had a look on his face that led us to think that Lil’ Squirrely might be a little…special.  And by “special”, I mean “brain damaged”.

So the stagehand goes and finds a Hefty bag box, (which we furnish with some peanut butter-cheese crackers,) Josh lifts Lil’ Squirrely into the box, and I carry it inside to the elevators. 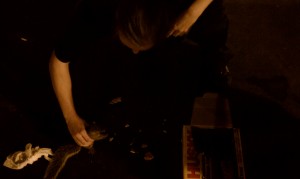 I was crazy nervous that Lil’ Squirrely was now going to decide to go apeshit on us and escape and force us to go running all over the Egg trying to catch a fucking squirrel.  But he was pretty chill.  He was definitely moving around, but more like he was going after another cracker than he was planning to tear off my eyelids.

So we get him upstairs, take him outside, put the box in the grass and open the lid.  And Lil’ Squirrely just sits there. 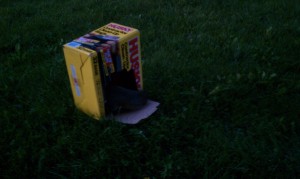 It’s only after tossing a couple more crackers into the grass that he venturs out of his box to pounce on the food.

And even then, he kind-of hangs out near us while he ate.  Finally our boss tells us that the house is opening in ten minutes and we need to get down there, so we toss Lil’ Squirrely a couple more crackers and bid him farewell.

I can only imagine that he’s frolicking through the grass, enjoying the leavings and offerings of the many state employees who lunch in the sunshine.

(But I can’t stop thinking that wouldn’t it have been funny, in a fucked up way, if he had hopped out of the box and was immediately swooped up by a hawk?  I know, save me a seat on the bus to hell.)

Previous post: Always Choosing Action (Except When Hamsters Are Involved)