Hey, there. Me again.

Actual me this time, not Kyle. Though, can we take a quick aside and discuss how romantic that blog post Kyle wrote for me while I was in the recovery room was? Especially when I tell you that I didn’t ask him to do that for me, I just asked him to keep my family updated?

Anyhoo, Monster here. It’s been over three weeks since my surgery now. I know, I know, I should have given you guys an update sooner. But to be fair, for the first week I was home I was on some pretty heavy drugs that made it difficult to focus on anything much more complicated than Super Mario Bros. (Of which I played a lot.) And after I got off the meds, I’ve been…tired. No, more like exhausted. Physically to be sure, but also emotionally. This has been a lot to handle, and I won’t pretend I’ve done so flawlessly. So to rehash the whole thing, for a good while, just seemed like too much to deal with. A lot of things have felt like too much to deal with lately. But I’m here now. And more importantly, I’m alive, grapefruit-free, and on the mend. Which has been both a little easier and much, much harder than I anticipated.

The real fun started the night of May 3rd, with what I dubbed the kickoff of #MonsterTumorFest2017. What happened that night, you ask? I ate a whole goddamn pizza, that’s what. By myself.

And why would I do that? Because May 4th was the start of the actual actual beginning of my surgery pre-op procedure. Which began that morning with marching orders to consume nothing but liquids, and not even good liquids, like eggnog or gin. Boring liquids, like apple juice and Gatorade. The only solids I was allowed to eat were Jell-o and Italian ices, which I tried to tell myself were food on account of the fact that I ate them with a spoon, but are not actually food at all. I even ended up drinking mugs of beef and chicken stock–even though warm, they totally smell like cat food–because my body smelled them and went, “Holy shit, that smells like food! I remember food! Fuck, I’m starving, this is delicious! FOOD!”

And that wasn’t the only fun on that delightful day. I had a thing called a “bowel prep” in store for me. I won’t go into details (you’re welcome,) but let’s just say that it involved 119 grams of Miralax… 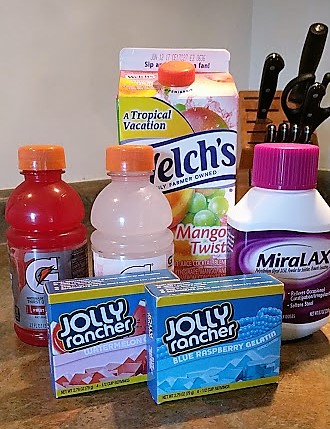 …and I was busy for the better half of the afternoon.

So yeah, in addition to all the…fun…involved in that, ridding my body of all matter made me sick. And on top of that, I was fucking. starving. Seriously, it’s only with mild hyperbole that I say that I would have gutted both my cats for a fucking Taco Bell Crunchwrap. But honestly, all the discomfort I was feeling that night turned out to be a blessing in disguise, because it worked beautifully to distract me from any nervousness I might have otherwise been feeling.

And then it was the big day. 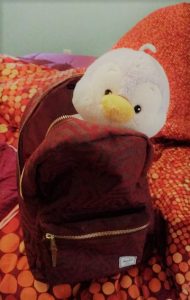 I was definitely nervous that morning. Not by anything rational, like that I might not wake up from the anesthesia or that I might have cancer, but by irrational things, like that I would accidentally forget and put on deodorant and then they would refuse to do surgery on me and I would have starved myself for nothing. Yeah, fear is a weird thing.

My surgery was scheduled for 10am, and I had to be at the hospital at 8am. It felt beyond surreal to walk into the hospital, strong and healthy, knowing that I would come out weak and broken. Things moved fairly quickly once inside, and before I knew it, I was peeing in a cup and changing into a hospital gown.

And yet, it was also about that time that the fear and anxiety began to take hold with both hands, and every moment that I wasn’t occupied with nurses and doctors (which was a fair amount of my time…I swear to god, I said, “Stephanie Van Sandt, March 4th, 1986” seven bazillion times,) crept by achingly slow. Eventually, Kyle and his mother (who stayed with us for a while to help take care of me, and to whom we are both eternally grateful,) were allowed to come see me, but only after getting the world’s two largest IVs with the world’s two biggest needles put in my arms and a shot in the stomach. So needless to say, Kyle pushed aside the curtain to find a very anxious, very afraid monster.

Moments later, I was being wheeled down the hall and into the OR. It wasn’t until they rolled me into the OR and I saw all the staff in scrubs that my nervousness became outright terror; it was all I could do to keep from bursting into tears. But luckily for me, I was only in there for a few minutes before…

…waking up in recovery and hearing someone say that I’d be able to go home today. I think. The rest of the day was pretty fuzzy. 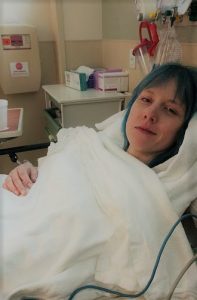 I found out later that my “grapefruit” turned out to be a gigantic benign dermoid cyst, which is a blob of tissue that can be made of hair, skin, teeth, and sometimes even eyeballs. (If you have a strong stomach, google that shit. It’s like something out of a goddamn sci-fi movie.) Mine enveloped my right ovary, which was also removed. This wasn’t exactly something we’d seen coming (we’d actually specifically been told that it most definitely wasn’t that,) but it turned out to be the best possible diagnosis. No cancer, no chance of cancer forming, no chance it will grow back. It was a freak mutation that laid dormant from the time I was born until a few months ago, and as soon as I heal from surgery, I’ll be right back to normal. Just, you know, minus an ovary.

Author’s note: This is part one of what I’m thinking is going to end up being a three-part saga all about how I got cut up. I know, that’s a lot, but bear with me through these last few posts and then I swear, you’ll never have to hear about any of my internal organs again. (Probably.) Part two in a few days, kisses until then!